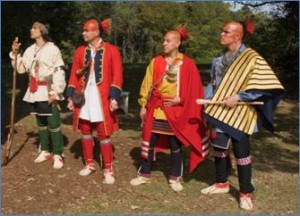 The Native American presence in Williamsburg during the American Revolution returns in two Revolutionary City® episodes — “So Far From Scioto” and “The War Party” — that begin an eight-day run Friday, Oct. 26.

“So Far From Scioto” chronicles the saga of three young Shawnee emissaries who were brought to Williamsburg in late 1774 as security to ensure compliance with a peace agreement that ended Lord Dunmore’s War in the Ohio Country. Entertained and honored as diplomatic emissaries, the delegation witnesses the turmoil and public outcry in Williamsburg during the spring of 1775. Torn by political uncertainty and their sense of honor to serve as security for the safety of the Shawnee people, they consider their course of action.

“The War Party” continues the Shawnee’s Revolutionary saga. As warfare increases in the Ohio Valley, the Shawnee face

difficult decisions about taking sides in the conflict. What best serves the Shawnee: ally with the British or honor the American request for neutrality?

and Nov. 2 on the Governor’s Palace Gardens stage, and at 4 p.m. Oct. 27 and 30, and Nov. 1 and 3 at the amphitheater in the Charlton’s Coffeehouse backyard.

Guests are invited to join the cast in behind-the-scenes looks at producing Colonial Williamsburg’s American Indian public history as the veteran actors and line producers openly discuss their work. Moderated by a cultural anthropologist, question-and-answer sessions allow guests a rare opportunity to explore Native American culture, history and civic engagement. “So Far From Scioto Unplugged” is presented at noon Oct. 27 and 30, and Nov. 1 and 3 on the stage in the Governor’s Palace Gardens. “The War Party Unpainted” is presented at 5:30 p.m. Oct. 26 and 31, and Nov. 2 at the Play Booth theater on Palace Green.

Admission to “So Far From Scioto” and “The War Party” programs is by Colonial Williamsburg admission ticket, Annual Pass or Good Neighbor Pass.